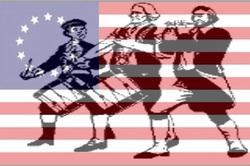 the revolutionary war went from 1775-1778 Revolutionary War" redirects here. For revolutions in general, see Revolution.This article is about military actions only. For political and social developments, including the origins and aftermath of the war, see American Revolution.
In this article, inhabitants of the thirteen colonies that supported the American Revolution are primarily referred to as "Americans", with occasional references to "Patriots", "Whigs", "Rebels" or "Revolutionaries". Colonists who supported the British in opposing the Revolution are referred to as "Loyalists" or "Tories". The geographical area of the thirteen colonies is often referred to simply as "America".