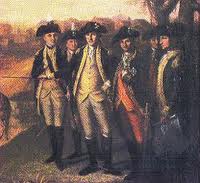 George Washington was born on February 22, 1732, in Westmoreland County, Virginia. Washington served as a general and commander-in-chief of the colonial armies during the American Revolution, and later became the first president of the United States, serving from 1789 to 1797. He died on December 14, 1799, in Mount Vernon, Virginia.George Washington could trace his family's presence in North America to his great-grandfather, John Washington, who migrated from England to Virginia. The family held some distinction in England and was granted land by Henry VIII. Much of the family’s wealth was lost during the Puritan revolution and in 1657 George’s grandfather, Lawrence Washington, migrated to Virginia. Little information is available about the family in North America until George’s father, Augustine, who was born in 1694.Augustine Washington was an ambitious man who acquired land and slaves, built mills, and grew tobacco. For a time, he had an interest in opening iron mines. He married his first wife, Jane Butler